1,3-Dimethylamylamine (DMAA, Methylhexanamine, Forthane, Geranamine) is an atypical sympathomimetic drug utilized in various sports supplements. It was originally investigated in the 1970's by the pharmaceutical company Eli Lilly as a nasal decongestant. In the original patent application, it was described as having less CNS effects then amphetamine, and less systemic symptoms then ephedrine. Also in comparison with ephedrine, it was deemed more volatile and therefore preferable in applications requiring volatility: nasal sprays, inhalers (1). In 2006, DMAA was re-released as a dietary supplement by Ergopharm (E-Pharm) in the product "AMP" as an extract of geranium oil.

Similar to Amphetamine, DMAA possesses a methyl substituent on the alpha-carbon which prolongs the drugs half-life by sterically interfering with monoamine oxidase. This substituent also enhances its ability to act as a catecholamine reuptake inhibitor (See Reuptake Inhibition below). Furthermore, an alpha methyl substituent increases the compounds amphipathism which expedites CNS penetration.

As the image below demonstrates, the requirements for a phenethylamine-type compound to directly agonise the adrenergic receptor include 1) a highly polar region most distal from the amine, and 2) a hydroxyl substituent on the beta-carbon. Furthermore, the orientation of the beta-hydroxyl group and alpha-methyl group influences its ability to directly agonize the receptor (1R,2S), versus its ability to act as a releasing agent (1S,2S). Since DMAA does not possess a polar substituent distal to the amine, nor is it able to interact with beta-hydroxylase enzymes, its ability to directly agonise the adrenergic receptor is completely eliminated. This characteristic narrows the pharmacological range of DMAA's effects to 1) reuptake inhibition and 2) catecholamine releasing.

Although (2S)-Amphetamine is the prototypical releasing agent, the structural criteria necessary for a compound to act as a releasing agent are fairly ubiquitous for phenylethylamine-type compounds. In fact, non-phenolic alkylamines like cyclopentamine and tuaminoheptane are also known to be potent releasing agents.

In order to act as a RA, a compound must be able to diffuse into the nerve soma, or be taken up by transcellular catecholamine channels. The former requires sufficient lipophilicity, and the latter requires structural similarity to either norepinephrine or epinephrine. It should come as no surprise then that DMAA is able to perform this function based its structural similarity to amphetamine.

The primary location for peripherally-acting releasing agents is in the terminal ends of nerves extending from the sympathetic nervous system to organs such as the heart, kidney, and to nerves supplying the vasculature. In these locations, RA's cause a localized release of norepinephrine into the synapse which acts post-synaptically to increase heart rate (beta-1), cause renal vasodilation (B1), and peripheral vasoconstriction (alpha-1). To a smaller extent, RA's are able to stimulate the release of epinephrine (EP) and norepinephrine (NE) from chromaffin cells of the adrenal gland. Since epinephrine is a strong beta-2 receptor agonist, peripheral vasodilation may partly offset the vasoconstriction induced by norepinephrine which acts primarily on alpha-1 receptors.

Reuptake Inhibition
Reuptake inhibition is an effective mechanism for potentiating an adrenergic environment by increasing the amount of time a catecholamine has to interact with a postsynaptic receptor. 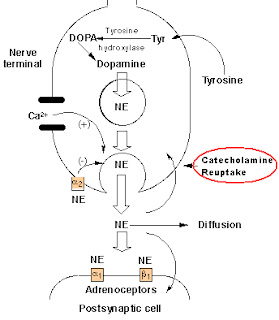 DMAA and Human Physiology
In 1948, DMAA was investigated for its effects on blood pressure and given to a single 78 kg male subject in dosages of 2 mg/kg (156 mg), and 3 mg/kg (234 mg) while fasted and at rest (4). The 2 mg/kg dosage produced elevations in systolic & diastolic blood pressure of 22 mm Hg, each, in addition to a decrement of heart rate of 8 beats per minute. The 3 mg/kg dosage produced intolerable side effects as well as an irregular heart rate.

In 2011, USP labs and the University of Memphis funded a study which examined the effects of caffeine alone, DMAA alone, or a caffeine & DMAA combination, on heart rate and blood pressure (5). The highest dose caffeine (250 mg) plus highest dose DMAA (75 mg) produced elevations of systolic pressure of 24 mm Hg, and elevations of diastolic pressure of 12 mm Hg, after 60 minutes. Heart rate decreased by 6 bpm also at 60 minutes.

These effects are congruent with the pharmacology described above. As a releasing agent, DMAA will increase the sympathetic tone resulting in generalized vasoconstriction. The best indicator of this event is by looking at its effects on diastolic blood pressure. Highly vasoconstrictive compounds like Phenylephrine profoundly impact diastolic pressure, which is a clue to the state of systemic vascular resistance. Similarly, since both studies demonstrated a negative chronotropic effect (heart rate lowering), it reaffirms the fact that DMAA possesses no tangible direct receptor agonism since it cannot overcome the baroreceptor reflex. For example, ephedrine is an effective releasing agent in addition to directly agonising beta receptors. The former modality produces elevations in systolic and diastolic blood pressure. The latter modality results in an increase in heart rate via direct beta-1/2 receptor agonism. Normally, the human body seeks to establish pressure homeostasis. When blood pressure becomes elevated for whatever reason, the heart rate decreases reflexively via vagus nerve stimulation of the heart. Norepinephrine alone is not potent enough to overcome the baroreflex, whereas epinephrine and other beta-2 agonists are; likely the result of beta-1/2 synergy in transduction mechanisms involving cAMP. Since DMAA elevates both diastolic and systolic blood pressure, while at the same time decreasing heart rate, it becomes clear that most of its pharmacodynamic processes involve norepinephrine.


Summary
1,3-DMAA possesses an interesting pharmacological profile with structural and physiological similarities to Amphetamine, Propylhexedrine, and Tuaminoheptane. It's main modalities are related to its ability to act as a releasing agent, and by reuptake inhibition. Although not discussed in the article above, 1,3-DMAA lacks polar constituents and therefore may have significant blood brain barrier (BBB) penetration. It may also be transported into the CNS by specific amino acid transporters. The result of these processes may produce symptoms associated with other CNS drugs (methylphenidate, amphetamine, modafinil) including alertness, insomnia, and euphoria.

Centralized effects are kinetically driven, where BBB penetration can be increased as a function of blood concentration divided by time. The quicker 1,3-DMAA is able to reach a high blood concentration, the more central effects can be anticipated. The fastest delivery methods are intranasal and intravenous, whereas the slowest delivery method is by mouth. Nevertheless, it is still possible to achieve a high blood concentration quickly by maximizing oral supplementation parameters. A solution which effectively homogenizes 1,3-DMAA is the best way to expedite gastrointestinal absorption and blood delivery. This is why products like Clearshot Concentrate

have demonstrated exceptional CNS effects in comparison to powders that must be mixed with water before consuming. Most of the latter do not yield homogeneous solutions, and therefore result in slower absorption and decreased CNS penetration. In the brain, DMAA would function in a similar manner to amphetamine and cause a release of both norepinephrine and dopamine. The latter compound responsible for the euphoric feelings associated with amphetamine and methamphetamine, whereas the former is responsible for an increase in alertness.

In contrast to other natural releasing agents/reuptake inhibitors like tyramine, 1,3-DMAA will not produce metabolites (octopamine; synephrine) which interefere with adrenergic signaling. Based on documented research with similar compounds, the most likely metabolites will be due to deamination, and N-methylation. Similarly, due to its alpha-methyl substituent, 1,3-DMAA probably enjoys a much longer half-life then tyramine (@ 30 min), and therefore more time to exert its influence within the body.