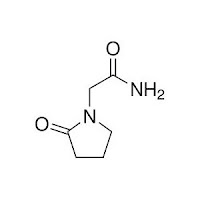 Introduction
Piracetam is a derivative of GABA which was originally designed to be an anxiolytic. Later testing revealed that it had no sedative or GABAergic effects, however it demonstrated an ability to enhance learning and cognition in some animal models. Further studies revealed a global cerebroprotective effect in the context of dementia, hypoxia, and other brain impairments.

In addition to its lack of GABAergic activity, it also lacks dopaminergic, anticholinergic, and antihistaminergic activity. Its one notable receptor interaction includes glutaminergic modulation at the NMDA and AMPA receptors.

CNS Activity
Although piracetam does not directly activate any receptor, it positively modulates certain CNS glutaminergic receptors through allosteric activation. Allosterism is a dynamic method of facilitating receptor activation by binding to a receptor subunit that is distant from the agonist binding site. One of the advantages of allosteric activation is that it supports receptor activation even in the presence of physiological receptor antagonists (barbiturates, benzodiazepines, alcohol). Similarly, allosterism prevents receptor over-activation in the presence of excessive agonist (glutamate). The latter characteristic is one of the modalities by which piracetam helps to prevent brain excitotoxicity in the context of hypoxia or traumatic brain injuries.

The NMDA receptor is a voltage-dependent ion channel that allows calcium to enter the neuron along its concentration gradient after activation by glutamate and glycine (or D-serine). Normally, this channel is blocked by a positively charged magnesium ion which is attracted to the negatively charged intracellular compartment. In order for the magnesium ion to be displaced, the intracellular environment must possess a net positive charge. 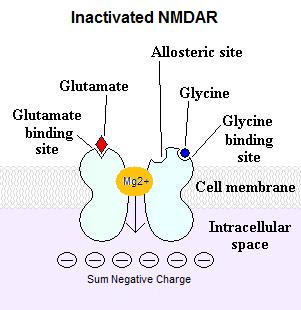 This circumstance is made possible when glutamate first activates the AMPA channel. These channels then allow the rapid influx of positively charged sodium ions which results in a temporary reversal of polarity of the intracellular compartment. 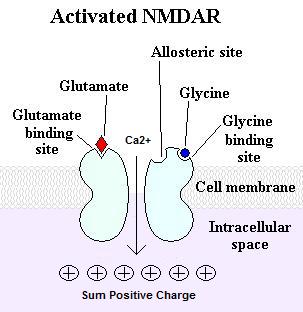 After influx through the NMDA channel, ionic calcium is able to activate various enzymes including those that increase the transcription of various genes.

The Theory
The NMDA receptor is intricately linked to memory encoding and storage. As mentioned above, activating the receptor causes the transcription of products responsible for neuronal plasticity, growth, and survival. These include the growth hormone Brain Derived Neurotrophic Factor (BDNF) and its receptor trkB (4, 5, 6, 7). Increasing BDNF is one of the mechanisms by which antidepressants reverse depression. Similarly, agents which potentiate the NMDA receptor (via potentiating the AMPA receptor) have demonstrated cognitive enhancing abilities in normal non-human primates, as well as the ability to completely reverse sleep deprivation (8, 9). Conversely, NMDA antagonists like ketamine and phenylcyclidine are well known to disrupt cognition, and impair memory formation.

In addition to enhancing glutaminergic neurotransmission, piracetam also effects, and is effected by, the cholinergic system. This system consists of 2 families of receptors (metabotropic & ionotropic) and its ligand, acetylcholine (Ach). In dementia and cognitive decline, both types of receptors are diminished along with the production of acetylcholine. The reason for the latter is due to a generalized death of acetylcholine producing neurons in the hippocampus, and due to diminished production of the enzyme choline acetyl transferase. The latter is responsible for the reason that supplementing with acetylcholine precursors has little impact on cognition in dementia, whereas compounds that prevent the degredation of acetylcholine (Acetylcholinesterase Inhibitors) markedly improve dementia symptoms.

One of the reasons why acetylcholine is able to improve cognition and memory is due to its effects on the NMDA receptor. Specifically, agonizing the M1 acetylcholine receptor enhances the responsiveness to NMDA stimulation by causing the pre-synaptic release of glutamate (10). Similarly, agonism of nicotinic Ach (nAch) receptors on post-synaptic neurons synergizes with the AMPA receptor in reversing the polarity of the intracellular environment, thereby encouraging NMDA activation (11). The densities of both types of receptors are diminished in dementia and mild-cognitive decline. In rats, piracetam has demonstrated the ability of restoring metabotropic Ach receptors in the frontal cortex of aged rats, along with facilitating the release of acetylcholine in the hippocampus (2). In another rat experiment, combining choline and piracetam together resulted in a profound enhancement of memory formation versus either compound used alone (13).

As recent studies have demonstrated, the main modality by which piracetam is now thought to enact its cerebroprotective effect is by enhancing the fluidity of the lipid bilayer; specifically, the fluidity of the mitochondrial membrane (3). The exact mechanism for this characteristic is unknown, although we do know that piracetam possesses no radical scavenging properties.

In the aged brain, complexes I and IV of the electron transport chain (ETC) become less active and result in the unchecked production of reactive oxygen species (ROS) which ends up damaging the DNA and cell membrane. Piracetam has been shown to increase the activity of both complexes and it has been suggested that this characteristic may support mitochondrial longevity.

The vast majority of healthy adults who use piracetam have sufficient mitochondrial membrane fluidity, and therefore piracetam's ability to enhance cognition through this mechanism is muted.


Enhancing the Effects of Piracetam
Piracetam has multiple known mechanisms for encouraging memory formation and cognition. Unfortunately, most of the effects are only observed in the context of abnormal brain function. Luckily, due to recent studies which have more comprehensively examined the mechanisms behind piracetam, it is possible to increase the effects of piracetam through synergisms.

As noted above, piracetam has been shown to increase the activity of Complexes I and IV of the ETC. Piracetam has also been shown to support mitochondrial longevity and function by enhancing membrane fluidity.

Coenzyme Q10 (CoQ10) is a fat soluble compound which participates in the ETC as an electron acceptor from Complex I and II. Relative deficiencies of CoQ10 have generalized deleterious effects on the body, mostly as a result of mitochondrial dysfunction. Supplemental CoQ10 has a multitude of health benefits including limiting membrane peroxidation, and reducing ROS formation. The latter two mechanisms would naturally support mitochondrial longevity and function, and synergize well with piracetam. Co-supplementing with Vitamin E helps to regenerate the active form of CoQ10, ubiquinol from its oxidized form, ubiquinone. There is also some evidence that the combination increases tissue retention of CoQ10 (14). Keep in mind that these effects would require chronic supplementation in order to be observed, and that the effects will be much more pronounced in those experiencing progressive memory decline.

The next mechanism by which piracetam may enhance cognition is by supporting cholinergic neurotransmission. Studies have shown that piracetam increases the density of metabotropic acetylcholine receptors in the cerebral cortex, and that it facilitates neuronal acetylcholine release in the hippocampus. The former mechanism may support attention and working memory through norepinephrine release and the latter may support cognition by downstream mechanisms involving the NMDA receptor. Acetyl-L-Carnitine (ALCAR) has been shown to increase the production of metabotropic glutamate receptors in various parts of the brain, although not in the hippocampus. The significance of this effect is unclear, especially in relation to cognition. One of the biggest mechanisms by which ALCAR may synergize with piracetam is by enhancing the production of acetylcholine by amplifying the enzyme choline acetyl transferase (15).

As mentioned above, the aged and demented brain has a diminished production of choline acetyl transferase. This enzyme is responsible for converting acetylcholine precursors into acetylcholine. Without an ability to maintain an acetylcholine reserve, Ach receptors slowly down-regulate resulting in self-perpetuating cognitive deterioration. Futhermore, since Ach receptors are intimately linked to the glutaminergic system, a decrement in Ach or Ach receptors will result in diminished BDNF production, thereby removing the signal for neuronal growth and survival.


Summary
Piracetam is the grandfather of nootropics and has been studied for the last 50 years. The effects of piracetam are subtle, even in the context of brain pathology. There is some evidence that its beneficial effects may accumulate over longer periods of time. The dosage of piracetam required to meet the minimum threshold for physiological significance is 5 grams per day. In order to maximize the effects of piracetam, the addition of CoQ10, Vitamin E, and ALCAR, should warrant contemplation. Similarly, supplementing with a choline source (Lecithin, CDP-Choline, Alpha-GPC) is a logical assumption based on the mechanisms proposed above, in addition to the rat study which demonstrated synergism. Utilizing an acetylcholine esterase inhibitor (AchEi) is a more advanced protocol and will be discussed in the next article.