The Future of Stimulants
With most of the better stimulants banned (Ephedra) or on the chopping block (1,3-DMAA), the supplement industry has been grasping for straws in order to produce viable stimulants for "fat burners," or pre-workout formulas. Some companies have resorted to putting massive amounts of caffeine or yohimbine in their formulas in order to induce stimulation (See this formula: 400 mg of caffeine per serving!). Others have resorted to using non-DSHEA approved stimulants like N-Isopropyloctopamine (See this formula). Still others are relying upon gimmicks like "Acacia Rigidula 98%" extracts (See Shulgin's thoughts on Acacia, and this recent study).

The introduction of N-Methyltyramine (NMT) is based mainly on deceptive marketing since NMT has been around for years as a component of Citrus aurantium (Bitter Orange). Compounds like halostachine, higenamine, and N-coumaroyldopamine, are generally well-intentioned stimulant replacements that are simply pharmacologically challenged, or are not suitable for PO (by mouth) administration. And finally, compounds like "Methylsynephrine" are misleadingly misnamed to trick people into thinking they are consuming the designer stimulant Oxilofrine (alpha-methyl-synephrine) instead of the inert beta-O-methyl-synephrine (See this study).

Nevertheless, there are still modalities to induce stimulation that circumvent the problem posed with structural analoges of PEA (namely, the Federal Analog Act). I will briefly discuss one of these modalities below. 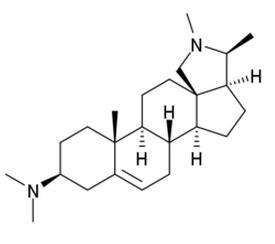 Conessine
This is a natural plant extract of Holarrhena antidysenterica that has the phenylethylamine pharmacophore buried deep within its steroidal structure. Although it has been used for decades as traditional Indian medicine against GI parasites, its main pharmacological intervention, for the purpose of this article, is its ability to antagonize the histamine-3 receptor (H3R) (1).

H3 antagonists have been studied for the past few decades for treating narcolepsy and ADHD since they are centrally stimulating (Read more here). In fact, the H3 inverse-agonist Pitolisant was demonstrated to be effective in treating narcolepsy in patients refractory to modafinil, methylphenidate, and even amphetamine (2).

Although conessine is an effective H3 antagonist with exceptional Blood Brain Barrier (BBB) penetration, it has largely been overlooked in the pharmaceutical industry due to its ability to directly agonise adrenergic receptors (3). The ultimate goal for an FDA-approved H3 antagonist medication would include wakefulness-promoting without peripheral effects such as hypertension, or tachycardia. For the supplement industry, however, peripheral effects could be a beneficial addition since agonising adrenergic receptors on fat cells induces lipolysis.

Obstacles to producing conessine include the exceptional price of synthesis, designing an efficient extraction technique, or convincing the Chinese to manufacture it in large enough quantities to be economical. Other obstacles include its near complete lack of pharmacokinetic and human safety data. Although the latter may be extrapolated from its use as Traditional Indian Medicine, the "dose makes the poison" and purified extracts of conessine have almost certainly not been historically used.