Introduction
Higenamine (demethylcoclaurine, DMC), a tetrahydroisoquinoline-type compound extracted from Tinospora crispa and various other plants, is the newest attempt by the supplement industry at producing a DSHEA-compliant stimulant. In contrast to N-methyltyramine, P-Phenethylbenzamide (mislabeled N-phenethylbenzamide), and N-coumaroyldopamine, higenamine actually has some potential in the context of adrenergic signaling.

Pharmacodynamics
In comparison to the compounds listed above, research on higenamine has produced numerous en vitro and en vivo research articles over the last few decades. Reaffirmed in the literature as recently as March 2012, higenamine was demonstrated to possess potent beta-1 and beta-2 receptor agonism [1]. Due to its ability to elevate both plasma and intracellular cAMP levels, it is also being studied for the treatment of erectile dysfunction [2] 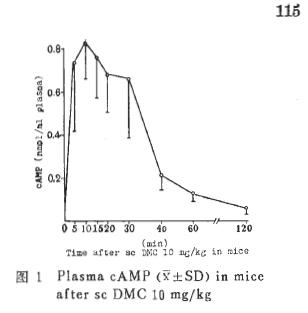 And although the greater majority of higenamine's effects are mediated through beta receptor agonism, there is also some evidence that higenamine has some alpha-1 blocking capacity, along with weak alpha-2 agonism [3].

Physiology
In the March 2012 article published in the Journal of Ethnopharmacology, higenamine produced effects congruent with beta-1 agonism (increased heart rate), and beta-2 agonism (decreased Mean Arterial Pressure) in anesthetized rats [1]. The latter may also be partially attributed to its alpha-1 antagonism/alpha-2 agonism, since higenamine has previously been shown to reduce diastolic pressure [4]. Beta-receptor agonism is a known mechanism for acetylcholine (Ach) release at the  Neuro-Muscular Junction (NMJ), and indeed higenamine has demonstrated this effect [5]. Increasing Ach concentration at the NMJ is an established means of increasing contractile strength of skeletal muscle. Presently, no study has been performed in the context of fat loss, and its kinetic limitations nearly preclude any significant lipolytic effects, despite beta agonism.

Structure Activity Relationships
Higenamine possesses the familiar phenylethylamine pharmacophore and so its ability to interact with adrenergic receptors should not be surprising. 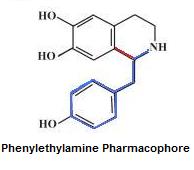 Similarly, it has an alpha-methyl substituent within its piperidine conformation which should effectively inhibit deamination via MAO (See Desoxypipradrol).

Structure activity relationship studies on higenamine derivatives have revealed that the 6-OH on the tetrahydroisoquinoline skeleton is a necessary constituent for adrenergic agonism. Methylating this position completely precludes any adrenergic acitivty, and in fact, creates a physiological antagonist [8]. This is important because COMT will likely create this species as a metabolite. After 1-2 half-lives (8-16 minutes), the main physiological effect will likely come from its inhibitory metabolites, rather than the stimulatory parent compound.

Higenamine, in contrast to its non-hydroxylated cousin 1-Benzyl-1,2,3,4-tetahydroisoquinoline, likely possesses limited neurotoxic characteristics due to its limited ability to enter the CNS. 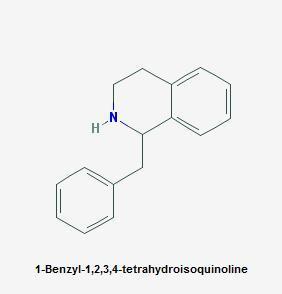 Summary
Higenamine definitely has the most potential of any stimulant introduced since 1,3-DMAA. Unfortunately, as the pharmacokinetic studies validate, higenamine possesses highly reactive metabolic hydroxyl substituents which limits bioavailability, and greatly reduces its half-life. Furthermore, the hydroxyl substituents also greatly reduce BBB permeability, and therefore the CNS effects common to other phenylethylamine-piperidin analogues will be absent (Pipradrol, Methylphenidate, Desoxypipradrol). Thus, the relevancy of this compound will be hard to rationalize.