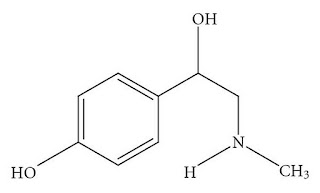 Introduction
p-Synephrine (Synephrine, Oxedrine) is a common ingredient in fat burning supplements and was made popular after the FDA's ban on ephedra. For the last 8-10 years, this compound was lambasted in the media for being dangerous and even deadly. A plethora of scientific reviews on synephrine were published in which the scientific community hysterically called for its banning due to case reports of strokes and heart attacks after individuals reported using synephrine-containing fat burners.

The reviews referenced older pharmacological studies on "synephrine" which pointed out its highly vasoconstrictive nature, and therefore its ability to induce arrhythmias, strokes, and heart attacks, were all the more likely. Unfortunately, the "synephrine" they were referencing was m-Synephrine, a popular OTC nasal decongestant also known as Phenylephrine (7).

m-Synephrine, in contrast to p-Synephrine, is not a natural alkaloid found in Citrus aurantium (Bitter Orange extract). The story becomes even more confusing because chemical analysis of synephrine-containing fat burners have indeed found m-Synephrine in addition to p-Synephrine (1). Whether or not these companies intentionally spiked their products, or if it was simply the result of poor quality control, the end result was almost the banning of a fairly benign compound. Luckily, a more detailed analysis of the constituents of C. aurantium has excluded m-Synephrine from its natural components.

Structure and Activity
p-Synephrine possesses a hydroxyl (-OH) group on the benzene ring. This substituent increases the polarity of the benzene ring which reduces blood brain barrier (BBB) penetration. Furthermore, it possesses a hydroxyl substituent on the beta carbon which also reduces BBB penetration (See Ephedrine vs. Amphetamine). The combination of both hydroxyls essentially precludes any CNS effects.

Similarly, a hydroxyl group in the para position is a metabolic stepping-stone towards complete elimination. For example, the main human metabolites of amphetamine are p-hydroxyamphetamine and p-hydroxynorephedrine. Para-hydroxylation also greatly enhances its interaction with Phase II metabolism, which partially explains its shorter half-life in comparison to similar non-phenolic isomers.

Pharmacokinetics
The half-life of p-Synephrine is between 2 to 3 hours (3). Its main metabolites will be p-hydroxymandelicaldehyde via monoamine oxidase (MOA), and conjugated products via phase II metabolism. In the past, there was speculation in the literature that p-Synephrine could be converted to Octopamine en vivo, although human studies have revealed no conversion (4). Similarly, it is conceivable that p-Synephrine could be converted to epinephrine by microsomal hydroxylase enzymes in the liver, although there has not been any direct evidence of this actually occurring (5). An oral dose of 46.9 mg has been shown to reach a maximum blood concentration of 2 ng/mL in humans (3).

Pharmacodynamics
Despite being so closely similar in structure to m-Synephrine, p-Synephrine is exponentially weaker at agonizing adrenergic receptors. Studies have shown that p-Synephrine is essentially 50x less potent then m-Synephrine at agonizing the alpha-1 receptor (3). This is a very good characteristic since it decreases the amount of direct vasoconstriction the compound is able to achieve. Highly vasoconstrictive agents increase peripheral vascular resistence and can precipitate strokes, heart attacks, or generalized peripheral ischemia. Conversely, p-Synephrine is approximately 40,000 x less potent then norepinephrine at agonizing either the beta-1 or beta-2 receptor. The latter receptor is responsible for the vast majority of inducible lipolysis.

Vesicular Exchange-Diffusion
Similar to other compounds discussed previously (Tyramine, Octopamine, 1,3-DMAA), p-Synephrine likely participates in vesicular exchange-diffusion with endogenous catecholamines. This means that, upon supplementation, p-Synephrine is transported into neurons and becomes packaged into vesicles near the nerve terminal. This event displaces compounds like norepinephrine and epinephrine into the synapse where they can participate in adrenergic signaling. Acute supplementation of p-Synephrine in doses greater then 50 mg has demonstrated this effect in humans (6). Although the authors of the previously mentioned study attributed the cardiovascular effects of p-Synephrine to direct agonism, a more plausible mechanism is vesicular exchange diffusion as discussed above.

p-Synephrine and Fat Loss
As previously mentioned, the primary mechanism for fat loss in humans is by the extracellular agonism of beta-2 receptor on adipocytes. Nevertheless, a much smaller proportion can also be induced by the agonism of alpha-1, beta-1, and beta-3 receptors. Similarly, antagonizing alpha-2 receptors can potentiate the mechanism induced by beta-2 receptors. With that said, the literature is fairly clear that p-Synephrine has essentially no physiological agonism of any adrenergic receptor.

In a 2011 study in which they tested p-Synephrine against human adipocytes at concentrations of up to 10,000 ng/mL, no lipolysis was observed (8). To put this into the proper context,  taking ~50 mg of p-Synephrine by mouth results in a maximum blood concentration of 2 ng/mL. Obviously, 10,000 ng/mL is not achievable by oral supplementation of any amount, and so p-Synephrine can be ruled-out as a direct facilitator of fat loss.

Conversely, it is plausible that p-Synephrine can enhance fat loss in other ways. For example, a Citrus aurantium extract was demonstrated to increase the thermic effect of food in women, but not men (9). Another study, published in 2011, measured the resting metabolic rate (RMR) of synephrine alone, or in combination with the bioflavonoids naringin, and hesperidin. 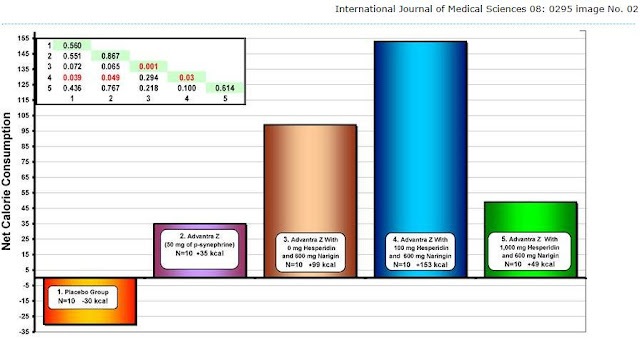 The fourth condition which combined Advantra Z (50 mg p-Synephrine), hesperidin 100 mg, and naringin 600 mg, resulted in a RMR increase of approximately 17.7 % in comparison to placebo (10). To put this into context, the combination of 70 mg caffeine and 24 mg ephedrine has been demonstrated to increase RMR 8% in comparison to placebo (11). The explanation for the increase in RMR in this p-Synephrine study is currently unknown, although it is possible that the bioflavonoids competitively inhibited Phase II metabolism to some degree, and thereby increased the amount of p-Synephrine reaching the blood stream. Whether or not these transient elevations in RMR actually translate into physiological consequence remains to be seen. It should also be noted that the makers of Advantra Z funded the study, and so bias should be entertained.

Summary
p-Synephrine is an extracted alkaloid from Bitter orange that is commonly seen in fat loss formulas. Its popularity soared as a replacement for Ma Haung ephedra after 2004, and its history has been marked for being mistaken for m-Synephrine. Presently, only one placebo-controlled trial has been published which has examined Citrus aurantium/p-Synephrine for the end-point of weight loss (12). No clinical significance was seen.