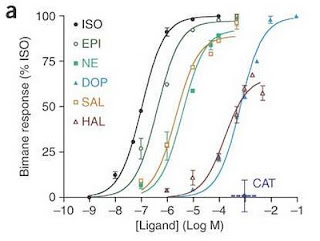 Pharmacodynamics:
In an en vitro study of the pharmacodynamics and Structure Activity Relationship (SAR) of various epinephrine-like compounds, halostachine was demonstrated to be 19% as effective as epinephrine in activating the beta2 receptor. As a comparison, m-synephrine was demonstrated to be 24% as effective. Halostachine was considered to have considerably less ability to activate intracellular cAMP then all other compounds, including synephrine (See picture below)(4). 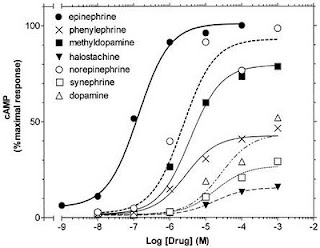 Pharmacokinetics:
Halostachine is rapidly metabolized by MAO and has a half-life of approximately 5-10 minutes (2, 5).


Structure Activity and Summary:
In comparison to epinephrine, halostachine lacks 2 hydroxyl groups in the m- and p- position on the benzene ring. The absence of these two constituents nearly precludes it from fully activating the adrenergic receptor in its current conformation.


“The presence of the catechol OHs and either the β-OH or the N-CH3 was absolutely required for full activation of the receptor and for full affinity shift. (4)”

Penetration into the CNS will also be limited due to the beta-OH, and due to the absence of an alpha-CH3 (decreased amphipathism). The most likely efficient target for this molecule is the alpha receptor, which is demonstrated above in the study on dogs. Intravenous administration produced mydriasis (alpha1), tachycardia (beta1), elevated body temperature - likely due to excessive vasoconstriction -, and a triggering of the baroreflex. This reflex is activated in response to increased arterial pressure in the absence of beta2 vasodilation. As is clearly demonstrated in the pharmacodynamic study above, halostachine has almost no ability to activate the beta2 receptor and is therefore extremely dissimilar to ephedrine. Since it has almost no capacity to induce cAMP elevation it has no purpose in a fat-loss formula, nor any supplement due to its extremely rapid metabolism. Similarly, since it is a partial-agonist, it will actually decrease adrenergic signaling in the presence of endogenous epinephrine, or exogenous ephedrine.