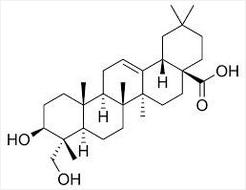 Introduction
Hederagenin is a highly water insoluble triterpenoid compound that can be found in various plants including Hedera helix and Chenopodium quinoa. It has been used as a component of the Fructus akebiae extract (FAE) in Traditional Chinese Medicine for the treatment of depression. In rodent studies, hederagenin was identified as the active compound in FAE and was determined to have potent anti-depressant qualities.

Hederagenin as a Psychotropic Drug
In a 2010 study, Chinese researchers extracted and purified hederagenin from FAE and tested the compound on rats exposed to stress-inducing experiments [1]. As compared with the proven antidepressant escitalopram, hederagenin performed equally in reducing overt signs of stress. Additionally, hederagenin was shown to decrease biochemical markers of distress including serum ACTH and cortisol. In 2012, the same group of researchers further elucidated the mechanisms behind the antidepressant nature of hederagenin [2]. In an en vitro experiment, they found that hederagenin markedly inhibited the serotonin, norepinephrine, and dopamine, monoamine transporters with a Ki of 3.89±0.18 nm, 0.22±0.04 nm, and 2.87±0.54 nm, respectively. (As a comparison, cocaine is known to inhibit these transporters with a Ki of between 0.2 and 0.7 micromoles, which is several orders of magntitude less potent than hederagenin). To support their results, the researchers then used microdialysis to directly measure the CNS monoamine levels of living rats exposed to varying armounts of FAE. They found that FAE at doses of 12.6, 25, and 50 mg/kg significantly increased the extracellular concentrations of serotonin, norepinephrine, and dopamine, which would be expected with reuptake inhibition. Converting this to a Human Equivalent Dosage (HED) for a 70 kg adult equates to about 142 to 565 mg's.

Pharmacokinetics
In 2011, a benchmark study was conducted to examine the pharmacokinetics of orally administered hederagenin in rats [3]. They found that not only was hederagenin orally bioavailable, but that it successfully crossed the blood brain barrier (BBB). The former is surprising since similar compounds are known to have exceptionally poor bioavailability, even in rats.

Physicochemical Characteristics and Kinetic Predictions
Hederagenin is an acidic and hydrophobic compound with a pKa of 4.9 and a Log Sw of -6.92. It has an estimated volume of distribution (Vd) of 0.41 L/kg, an estimated GI transluminal diffusional capacity of 30-70%, and a blood brain barrier permeability coefficient (LogPS) of -3.5 [4].

My Interpretation
Most of the positive studies done on hederagenin were performed by the same institution (Southern Medical University, Guangzhou, China), and mostly by the same group of researchers [1, 2, 3]. And although I do not propose any research fabrication or bias, results this impressive should be replicated and verified. Similarly, although the rat pharmacokinetic study referenced above showed adequate bioavailability and BBB penetration, I suspect this will not be the case with humans.

Summary
Hederagenin is a very interesting compound which has demonstrated potent monoamine reuptake inhibitory properties in at least one study. These results are not exceptionally surprising since hederagenin is a component of an extract that is commonly used to treat depression in China. Unfortunately, there are no human safety or pharmacokinetic studies, and the existing en vitro and animal studies have not been independently replicated. Furthermore, the compounds chemical structure itself inspires doubt as to its true bioavailability and BBB accessibility, which I predict to be much worse. Ultimately, the studies performed on this compound to date are a great starting point but much more research is necessary to reconcile its physicochemical disparity with the remarkable effects it seems to be capable of.