Introduction
Aegeline (N-[2-hydroxy-2(4-methoxyphenyl) ethyl]-3-phenyl-2-propenamide) is the latest attempt by the supplement industry to produce a natural "anabolic." This compound, extracted from Aegle marmelos Correa, is the para-methoxy derivative of N-Cinnamoyloctopamine, a common food additive. 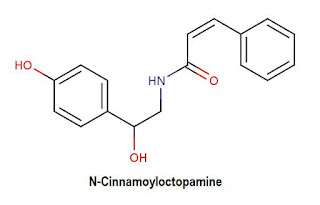 As is the case with most other secondary amides, this compound will be metabolized in the liver into two different species: phenylacrylic acid, and para-methoxy-octopamine. The rate at which these two species are created is presently unknown.

Pharmacology
In the murine model of diabetes, aegeline was shown to decrease blood sugar at a dose of 100 mg/kg. Converting this to HED based on BSA equals about 840 mg for a 70 kg adult human. At a human equivalent dose of about 420 mg, aegeline was demonstrated to decrease triglycerides, while improving cholesterol ratios in the murine model of dyslipdemia (1). The authors concluded, "The reasonable mapping of [aegeline] to validated pharmacophoric hypothesis and 3D QSAR model with an estimated activity (283 nM) suggest that [aegeline] might be a beta(3)-AR agonist." A follow-up study done in 2011 by the same researchers confirmed aegelines antihyperlipidemic & antihyperglycemic properties (2).

These results should not be surprising as octopamine has been known for years to possess these properties (3). In fact, octopamines beta(3)-agonism was clearly elucidated as far back as 1999 (4). Unfortunately, the beta(3)-adrenergic receptor is only weakly contributatory to lipolysis in humans, and octopamine was demonstrated to possess no capacity to induce lipolysis at all (4, 5). In beta(3) insensitive animals (humans), octopamine actually induces pro-adipogenic cascades through its production of hydrogen peroxide via intracellular deamination (3).


Summary
Aegeline may indeed possess inherent anabolism as a function of its ability to convert into an octopamine derivative. Indeed, para-methoxy-octopamine (Para-OMe-Octopamine) is one of octopamines metabolites via COMT in humans. Unfortunately, the anabolism that aegeline induces is likely restricted to adipocytes since humans are extremely insensitive to beta(3)-AR agonism.

In the studies in which aegeline demonstrated antihyperglycemic and antihyperlipidemic properties, the animals utilized were both murine which, as described above, are beta(3)-AR receptor sensitive. Furthermore, these animals were tested against specific disease pathologies to amplify their effects. It should go without saying that the results produced will probably not translate to humans.