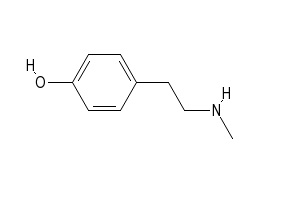 N-MethylTyramine (NMT) is a new phenylethylamine derivative introduced as a replacement for 1,3-DMAA in various sports supplements. The scientific literature on this compound is sparse, and human data does not exist. Furthermore, most of the en vitro evidence suggests that it possesses the same characteristics as its chemical cousin: tyramine. This is disappointing since tyramine has an unfavorable pharmacological profile. In addition to depleting vesicular catecholamines in a reserpine-like fashion, it also converts to a false neurotransmitter (octopamine) which displaces active neurotransmitters (dopamine/EP/NE) from synaptic vesicles. Once an action potential reaches the terminal button, vesicles containing a mix of DA/NE/EP and octopamine will be deployed into the synapse. Since octopamine has almost no activity on human adrenergic receptors, it will essentially be acting as a receptor antagonist via the law of mass action. Furthermore, releasing agents are renown for increasing the oxidative potential of the extracellular environment by overloading MAO with catecholamine substrates. Unfortunately, nervous tissue is not as resilient towards oxidative stress as compared to other tissue, and so this characteristic of NMT/tyramine is an important concept to remember. 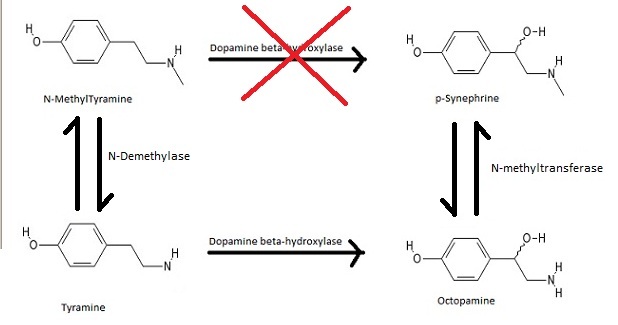 Contrary to popular wisdom, N-methyl derivatives of phenylethylamine are unable to be metabolized by dopamine beta-hydroxylase. This effectively renders NMT with no intrinsic ability to activate adrenergic receptors, although its ability to convert to metabolites with some activity still exists. The liver will remove the N-methyl substituent, thereby converting it to tyramine. Tyramine is likely the target compound with catecholamine-releasing properties, not NMT, and since its half-life is 6x's that of NMT, tyramine will likely have sufficient time to convert to octopamine, and thereby create an antagonistic environment towards adrenergic receptors with octopamine, a false neurotransmitter. Very little, if any, of the remaining octopamine will be converted to p-synephrine. 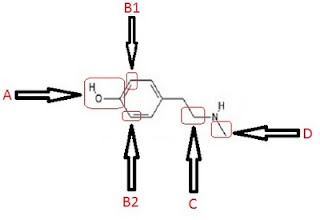 A: NMT possesses a para-hydroxyl on the benzene ring which increases the polarity of the phenyl substituent and thereby decreases lipid solubility. Ultimately this will drastically decrease blood-brain-barrier permeability, and therefore restrict significant CNS effects.

B1;B2: NMT lacks a meta-hydroxyl substituent which essentially precludes it from significant adrenergic receptor agonism even after beta-hydroxylation (i.e. conversion to p-synephrine).

C: NMT also lacks a methyl group on the alpha carbon (one carbon away form the nitrogen). This addition generally prolongs the drugs half-life by sterically interfereing with MAO, and also increases its ability to act as a DA/NE reuptake inhibitor. The absence of this substituent generally equates to rapid metabolism and elimination. This holds true for NMT which has a half-life of ~5 minutes.

D: Finally, NMT possesses an N-methyl substituent which effects the dynamics of the compound. In comparison with dopamine which mainly effects DA receptors, epinine (N-Methyldopamine) possesses both dopaminergic and adrenergic receptor agonistic properties. Similarly, NMT should (in theory) possess more observable adrenergic receptor activity when compared to tyramine, although even after beta-hydroxylation, the concentration necessary to produce significant adrenergic activity is not achievable with oral supplementation. Similarly, since NMT has to first undergo N-demethylation into tyramine, the amount of beta-hydroxylated metabolite will likely be clinically unobservable.

In summary, the pharmacology of NMT is similar to its primary amine analogue: tyramine. Differing from tyramine, however, NMT possesses an N-methyl substituent which creates a secondary amine. Based on activity-relationships of similar structural derivatives, the addition of an N-methyl substituent increases affinity for adrenergic receptors in theory, although en vivo research in humans has documented negligable activity even after beta-hydroxylation. This is compounded by the absence of a meta-hydroxyl substituent on the benzene ring.